< Back to Press Releases 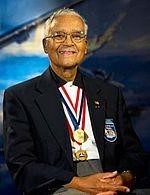 Charles E. McGee was born in Cleveland, Ohio on December 7, 1919, to Lewis Allen and Ruth Elizabeth Lewis McGee who died shortly after the birth of his sister. His father was, at times, a teacher, social worker and Methodist minister, jobs that led to frequent moves.  As a youth, McGee was a member of the Boy Scouts of America (BSA) and earned the Eagle Scout award on August 9, 1940. He later served in district and regional positions in the BSA. At the 2010 National Scout Jamboree, he was recognized with the Distinguished Eagle Scout Award.

In March 1942, he was a sophomore at the University of Illinois studying engineering. After enlisting in the US Army on October 26, 1942, he became a part of the Tuskegee Airmen having earned his pilot’s wings, and graduating from Class 43-F on June 30, 1943.

By February 1944, he was stationed in Italy with the 301st Fighter Squadron of the 332d Fighter Group, flying his first mission on February 14. McGee flew the Bell P–39Q Airacobra, Republic P–47D Thunderbolt and North American P–51 Mustang fighter aircraft, escorting Consolidated B–24 Liberator and Boeing B–17 Flying Fortress bombers over Germany, Austria and the Balkans. During missions, he also engaged in low level attacks over enemy airfields and rail yards.  On August 23, 1944, McGee while escorting B-17s over Czechoslovakia, he engaged a formation of Luftwaffe fighters and downed a Focke Wulf 190.

Promoted to Captain, McGee had flown a total of 137 combat missions, and had returned to the United States on December 1, 1944, to become an instructor on the North American B–25 Mitchell bombers that another unit of the Tuskegee Airmen were working up to deploy to the Pacific Theater. He remained at Tuskegee Army Air Field until 1946, when the base was closed.

After World War II, McGee was sent to Lockbourne Air Field (Columbus, Ohio) to become the base operation and training officer, later in 1948, being posted to an Aircraft Maintenance Technical Course and was assigned to an air refueling unit. When the Korean War broke out, he flew P-51 Mustangs again in the 67th Fighter Bomber Squadron, completing 100 missions, and being promoted to major. Continuing his service with the United States Air Force as it was reconstituted, McGee continued to serve as a fighter pilot, flying Lockheed F80 Shooting Star and Northrop F–89 Scorpion aircraft.

During the Vietnam War, as a Lt. Colonel, McGee flew 172 combat missions in a McDonnell RF–4 photoreconnaissance aircraft. In a 30-year active service career, he accumulated a three-war total of 409 fighter combat missions.

After a series of other appointments both in the United States as well as in Italy and Germany, and promotion to Colonel, McGee retired on January 31, 1973. He ended his military career with 6,308 flying hours.  After his military service, McGee held many prestigious functional and honorary positions around the field of aviation. In 1978, at the age of 58, he completed the college degree at Columbia College in Kansas City, over thirty years after his initial enrollment at the University of Illinois. Though interrupted by World War II, attaining a college degree had been a lifelong goal.

McGee served as the Director of the Kansas City airport and as a member of the Aviation Advisory Commission. For over 30 years, he has been an ambassador of the Tuskegee Airmen Incorporated (TAI), giving numerous public addresses and has received accolades including the National Aeronautical Associations “Elder Statesman of Aviation.” McGee served two terms as National President of TAI.

In 2005, McGee was part of a group of former Tuskegee Airmen, who flew to Balad, Iraq, to speak to active duty airmen serving in the 332nd Air Expeditionary Wing, the current incarnation of the 332nd Fighter Group.

McGee was recognized for his combat and military service with a number of awards including: Distinguished Flying Cross with two Oak Leaf Clusters, Legion of Merit with one Oak Leaf Cluster, Bronze Star, Air Medal with 25 Oak Leaf Clusters, Army Commendation Medal, Presidential Unit Citation, Korean Presidential Unit Citation, Hellenic Republic World War II Commemorative Medal along with related campaign and service ribbons. In 2007, President George Bush awarded the Tuskegee Airmen, including McGee, the Congressional Gold Medal.  In 2011, he was inducted into the National Aviation Hall of Fame in Dayton, Ohio. He also served as a consultant to the 2012 George Lucas film, Red Tails.